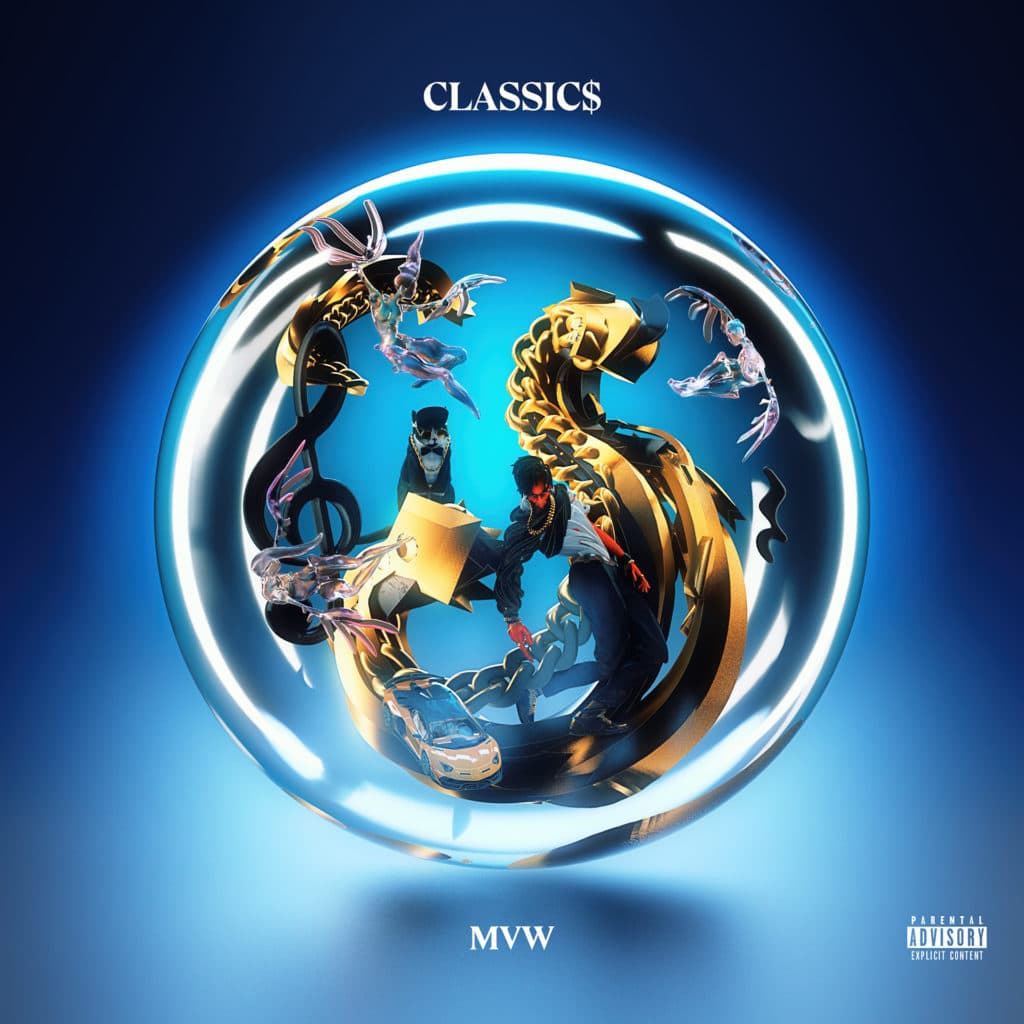 What are the classics?

All of these artists—no matter how seemingly disparate—share a penchant for boundary-breaking. As such, they’ve influenced and impacted us for decades, even generations now, to affirm their classic status.

Still, we hunger for more classics. We yearn for them. We search for them high and low.

These eight tracks revolve around an inimitable axis orbited by eloquent symphonic transmissions and poetic lyrical firepower all at once. He’s closed the gap separating polar opposites, building a new sonic union.

As such, he’s done the most classic thing possible and broken the mold altogether. This is a roadmap of CLASSIC$.

Living up to its title, “Intro” issues an invitation into the world of CLASSIC$ as well as Michael Vincent Waller’s larger body of work as a renowned composer. A portion of his violin and piano piece entitled “Sequel” doubles as the classical backbone of the track and “frames the sound world of the album,” according to Waller. He initally stumbled upon Jaydonclover by way of a review in WIRE Magazine. Reaching out, they developed a creative dialogue, which flourishes here. Jaydonclover’s baroquely poetic lyrics engender a sense of mystique at the onset that carries through the entire tracklisting.

Strings bleed into a trio recording of “Per La Madre e La Nonna” from Waller’s The South Shore. For all of its simplicity, the chantable chorus emanates urgency above hollowed-out trap undertones uplifted by strings. It also highlights Valee’s voice for the first of four times, presenting a sonic omen of things to come. “Valee created continuity,” adds Waller. “He was the perfect choice for a collaborator over this classical backdrop, because his voice is as subtle and understated as the beats are.”

“Still Do” cemented the partnership with Valee as their first collaboration. It illuminated the complexity of CLASSIC$. The strings bend around a polyrhythm, pushing into the natural groove. Meanwhile, Valee delivers confident and catchy bars with wordplay as pliable as the sonic architecture. “It’s one of my favorites, because it has a lot of nuance,” Waller states. “The way the piano, cello, and drums are layered is extremely consequential. It’s natural and alive.”

Cited as “the most complex beat,” the topsy-turvy “Drippin’” wrings out tension through an otherworldly trio of piano, cello, and violin. Marking the first collaboration between these two buzzing talents and an orchestrated architectural move by Waller, Lil Gotit’s voice flutters and floats as Valee dips into the subtle bounce. These effervescent melodies have more got more than enough drip to spare.

Flipping the script dramatically, bassoons pipe up through “Really Wanna Know.” (Seriously, have you heard a bassoon in hip-hop? We’ll wait…) These boisterous sonic fits only wait to be bodied back into submission by Memphis menace and rising star Duke Deuce, Valee, and Shanique Marie. They light the fire at the core of this intricate soundscape.

“Survey Says” kickstarted the entire project and “set the tone for what was possible” as Waller states. It’s where he seamlessly integrated the classical instrumentation, samples, and in-the-box beats with fly and fiery rhymes meant to scorch on impact. Unspooling their creative partnership, Luger sealed “Love: I. Valentine” from Waller’s Moments inside of a cavernous 808s and tense percussion. Even though it formulated in 2020, the world heard it fourteen months later. “It’s antithetical to how hip-hop is made,” he laughs. “Usually a song is recorded and released the next day! This was a meticulous process where each song was sculpted over many versions and chiseled down into what it is.”

The flute arrangement of “Outro” mirrors the breathy calm of Jaydonclover’s final vocal performance on CLASSIC$. It ends on a blissful exhale. “It encapsulates the dichotomy of the record,” Waller leaves off. “There are hard-hitting beats and free-flowing instrumental compositions. The ‘Intro,’ ‘Interlude,’ and ‘Outro’ tie a lot of this together to make a statement.” That statement resonates loud and clear as one of musical insurgency, invention, and innovation all at once. It’s pretty classic.